The new Zenith CH 750 CRUZER is an economical all-metal two-seat cross-country cruiser that you can easily and quickly build yourself, and fly with your Sport Pilot license. The CH 750 CRUZER is the “on-airport” version of the popular STOL CH 750 “off-airport” light sport utility kit plane, famous for its roomy cabin with comfortable side-by-side seating and easy cabin access from both sides. While influenced by its well-known STOL predecessors (the STOL CH 701 “Sky Jeep”, the STOL CH 750 and four-seat CH 801 sport utility aircraft), the CH 750 Cruzer is an all-new design optimized as an economical cross-country cruiser for typical (airport) operations.

The complete kit for the CH 750 Cruzer is even quicker and easier to build than the STOL CH 750, which averages under 400 hours kit assembly time. The all-new CH 750 design is available as a new easy-to-build kit which revolutionizes ease and simplicity of construction, drawing upon Zenith’s decades of experience in the kit industry.

The Zenith CH 750 Cruzer features an all-new airfoil supported by a single stream-lined strut. Compared to the STOL CH 750, the empennage has also been redesigned for its new mission, with a symmetrical stabilizer and a shortened horizontal tail span. The vertical tail features a fin and rudder (replacing the traditional all-moving vertical tail design of the Chris Heintz STOL series). In keeping with its mission, the Cruzer is fitted with 5.00 x 5 aircraft wheels and new wheel fairings. The instrument panel of the new design is also wider and more conventional than the STOL CH 750 (that has a narrower instrument panel to improve forward-visibility in extreme nose-high attitudes associated with STOL flying).

The Zenith CH 750 Cruzer was introduced at Sun’n Fun and was flown to the show by Zenith Aircraft Company president Sebastien Heintz (1,000 miles from the factory in Missouri). The prototype demonstrator aircraft is equipped with the UL350iS 130-hp fuel-injected UL-Power engine and the latest Dynon SkyView glass panel display system. As equipped, the aircraft weighs 780 lbs., providing a useful load of 540 lbs. at the 1,320 lbs. LSA gross weight limit. Cruise speed is 118 mph, rate of climb is 1,200 fpm, and stall speed is 39 mph. The new design utilizes the same firewall as the STOL CH 750 and the low-wing Zenith CH 650, meaning existing firewall-forward engine packages are readily available including the Continental O-200, Rotax 912 series, Viking (Honda), Jabiru, Corvair, and others.

Complete airframe kits for the new design are offered by Zenith Aircraft Company. As with other all-metal Zenith kits, this newest model will be built using the latest modern manufacturing (CNC) technology to offer matched-hole assembly throughout. The new easy-to-build kit draws upon Zenith’s decades of experience in the kit industry, requiring less than 400 hours to assemble the airframe from the kit (requiring only basic skills and simple hand tools).

Overview of the Zenith Aircraft 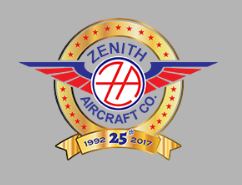